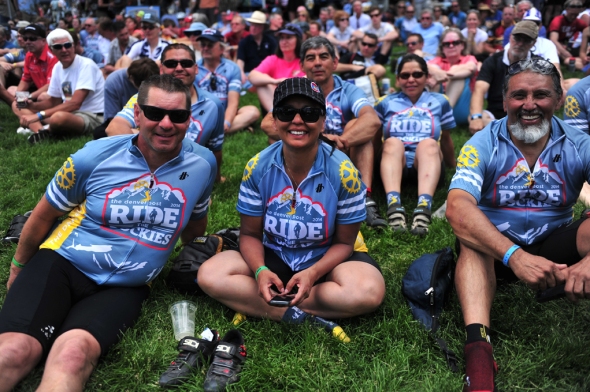 After almost 500 miles through wind, snow and heat, we still smile!

Been back from vacation for nearly two weeks. My weight is coming down and I’ve received invitations to two of my three big rides for the season. I’m so excited, I just want to get out and hammer!! But I shouldn’t.

After a season dogged by knee pain, I’ve realized a few more easy rides would not be that bad for me. For the last 18 months or so, it’s been all hammer all the time! While that’s great for the cardio system and a great deal of fun, it can lead to over-use problems. I’m in good shape and have at least three months to my first organized event. Now might be a good time to back off the intensity, just a bit, until the knees feel better.

If you are having these issues, I suggest the same. Also, spend some quality time with a foam roller, massage ball or if you can afford it, massage therapist. Sometimes the problem has to do with the sliding tissues in the front of the legs adhering to each other, creating uncomfortable conditions, including the pulling of the knee cap into the joint.

Also, this is the best time of year to have that bike fit re-assessed. Find a reputable dealer and fitter and spend the money. It will result in long-term savings as you won’t have to spend as much on doctors, PT’s and pharmacists. Those long, ambitious rides will be more comfortable. I was grinding up from State Bridge, Colorado, last season, during day four of Ride the Rockies and was considering the sag wagon. Luckily, my fitter from Boulder’s SportsGarage happened to be on course and made a small but pain-relieving adjustment that allowed me to finish the day, as well as the next two. Get it done ahead of time and it won’t throw doubt and pain into your favorite rides and tours.

For more ideas, go to Mobility WOD for more instruction as to keeping the knees happy and healthy. You can also pick up Dr. Kelly Starrett’s “Becoming a Supple Leopard” to have a reference on hand. The book helps athletes take care of a wide range of movement issues, making for happy muscles and joints.

The Santos Tour Down Under begins next week, kicking off the Pro Cycling season. The best news out of this may by all about the women. Many of the big World Tour events are adding women’s events to the line up. The Amgen Tour of California, The USA Pro Cycling Challenge and the biggie, The Tour de France will add women’s events this year. Last year’s women’s event on the final day of the men’s race proved so popular that more stages have been added. This is the best thing to happen to women’s cycling in a long time, and hopefully will continue.

On the personal side, friends of mine invited me to ride the Triple Bypass with them. If you don’t already know, the Triple Bypass is a bucket-list sort of ride. It is 120 miles over three big mountain passes from Evergreen, Colo. to Avon. For the truly hard-core, the organizers, Team Evergreen, added a second day: the same route, only backward! I will save that for another year.

The wonderful Liz Brown of Ride the Rockies contacted me this week, so I will once again, be riding this week-long tour of the Colorado high country. RTR is not the toughest, but is the oldest and most popular of the Colorado tours. RTR celebrates its 30th ride through the mountains and will announce the route at a party in Downtown Denver on Saturday, February 7. If you want to find out early, go to http://ridetherockies.com/.

The route announcement party runs $40 dollars on line, $50 at the door. It’s a great time and I plan to record a good bit of it for a future post.

So get out and ride. Bundle up or spend some quality time with your trainer. The season will be upon us before you know it.

The beauty of a new year is the ability to reset. Reset goals. Reset attitudes. Reset our bodies and minds. The last year was as crazy as the one before and I see no sign of it letting up. So I’m buckling up for another great ride.
Fun little segway, I just received my invitation to the 2015 Ride the Rockies Route Announcement Party. This year the kickoff to the training season is Saturday, February 7, at the Denver Center for Performing Arts. Last year, the route was a bit of a loupe, beginning in Boulder and heading west and eventually north through Steamboat Springs, before returning to the I-70 Corridor and Golden. The year before was a swing through the Southwest, ending in Colorado Springs. With the major roads of Northern Colorado repaired, for the most part, and awaiting the return of the Pro Cycling Challenge, perhaps RTR will follow suite.
One of the great things about the route announcement is that it creates a tangible path to a goal. I have hit the peak of my winter weight and look forward to the return of longer evenings and longer rides. The route announcement is a solid demarcation between the preseason and preparatory phase and the active, sport specific training phase.
I plan to focus a bit more this year, as I have several big goals in mind. I want to Ride the Rockies again, run the Estes Park Half-Marathon with my wife, enter the Mount Evans Hill Climb and possibly the Double Triple Bipass. This is all on top of the Courage Classic, my favorite annual ride. I hope to train for it using the CrossFit Endurance template, as well.
If you haven’t read my ranting a about CFE, yet, let me quickly sum up: CrossFit Endurance takes the basics of CrossFit, varied high intensity movements, as well as emphasizing skill and form work, to get the most out of a short workout. I should get as much training as I need in about 10 hours a week. I will probably log more time than that as the weather warms simply because I love riding. You get the idea. Right now, however, I’m still trying to take it easy.
Along those lines, I am reading “Trizophrenia: Inside the Minds of a Triathlete” by Jef Mallett. Mallett is a cartoonist with a daily strip called “Frazz” and a contributor to Velo and Inside Triathlon magazines. He is humorous and spot-on I his depiction of triathletes, how we think, how we eat, how we live. It is just the right read while waiting for the snow to melt.
I have a lot of projects in mind, so my head is going a lot faster than my typing. Look forward to the coming season. Make plans. Stash a little bit of money for travel and dream fast, lite dreams.
Have fun, be safe. I’m going riding . . . Soon. 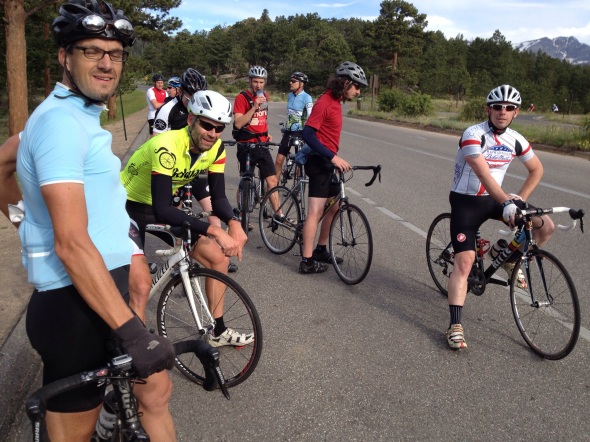