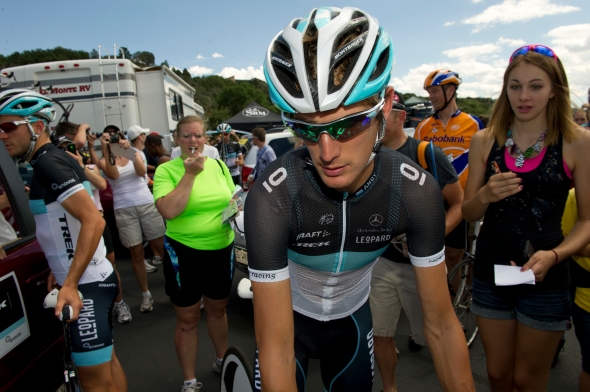 Andy Schleck wheels past awe-struck fans at the 2011 USA Cycling Challenge prologue in Colorado Springs in August. Schleck fell and fractured his pelvis during a June tune-up race and will miss the Tour de France this year. 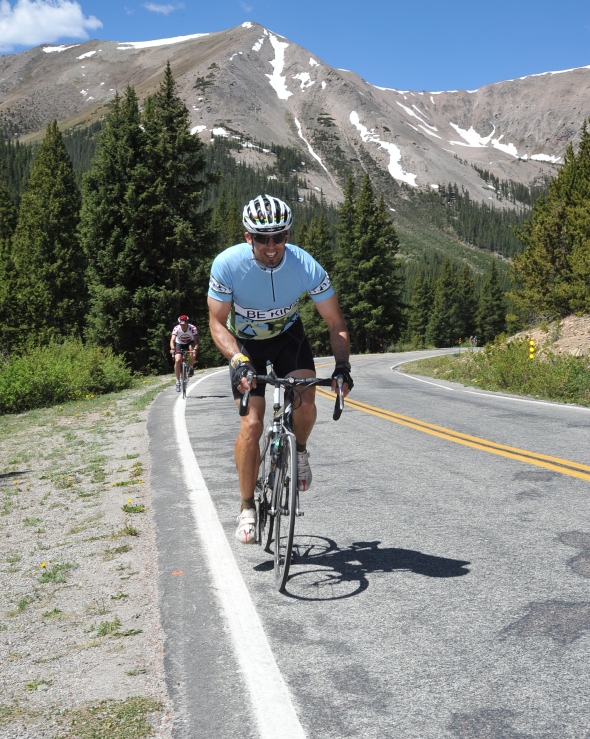 Me suffering on the Category 1 climb of independence Pass on the “Queen Stage” of Ride the Rockies. Sixteen miles, 4,000 foot elevation gain. Then a slow gradual climbing slog into Leadville over dirt and crappy roads. What a great day!

The best known advice for new adventures is “Expect the unexpected.” I’ve known it and have seen it play out on many occasions. I once blew the engine of a Dodge Colt at the Ohio – Michigan border. Then, on a different trip to see my mother and little sister, I, again, killed a car, then walked around a well-to-do Ann Arbor neighborhood trying to find a phone. It’s been a while ago. Wednesday morning, in Leadville, a fellow rider with the worst sleep apnea you can think of past on. The man, in his early 50s, died in his sleep when he couldn’t get enough oxygen at 10,200 feet.

Those were more negative examples. I have some great examples of much more positive sort. I have met long-time friends who do Ride the Rockies every year. I’ve met people who have come from islands, from the east coast, the west coast, from Wisconsin and many points in between. I’ve met a pair of of sisters who live in different parts of Colorado and come together for this event. They sing, they dance, they grill.

I’ve discovered that if I’m tired enough, I will sleep on a gym floor with hundreds of other worn-out cyclists. I will eat Powerbars as a meal when I run out of cash. I found that one can not thrive on Powerbars and dried fruit exclusively. At least I can’t. I can climb a category two climb in “Pro” gearing. It hurts, and it’s not fast, but I can do it.

I know how a saddle sore feels.

I know that if I go long enough without sleep, I can drift off and into a dream while typing.

Massage therapists deserve every cent they make, as do most bike mechanics.

No mater how advanced modern technology gets, it will still fail, and another bike ride, even after 250 miles of riding in three days, will make everything better, again.

I realized that there are plenty of other parts of our state of Colorado that I want to explore. There is much of this state I have yet to see. Further, while I’m a bit beat up and tired right now, I wouldn’t mind exploring by bike.

There are plenty of cyclist as well as drivers who don’t understand the concept of sharing the road. I have discovered that angry old guys in Leadville don’t know that 98 percent of cyclists, in America, own cars as well, and therefore do pay their fair share to use the road. I also heard a great argument stating we could tax cyclists more, but then you must let them use the entire lane.

Road bike tires do not like milled road surfaces.

Most bike mechanics are about the nicest people you want to meet.

Total strangers will share grilled veggies if you ask nicely. They will also open up, sing and dance. Really.

Managing a rolling town of 2,000-plus people is not always easy or smooth, but if done enough, no one will notice when things get crazy.

Everyone has a favorite and least-favorite variety of riding. Not everyone likes rough roads or headwinds. I don’t enjoy long climbs.

Tiny towns will go out of their way to make you feel welcome in hopes that you might come back.

It only takes about three days before 2,000 strangers start to feel like a community.

And finally, as much as I’m enjoying all of this, like Dorothy in the Wizard of Oz, There is truly no place like home.