I’m watching the second stage of the USA Cycling Challenge on my laptop while I write this. Don’t tell my daughter, but I will know the results long before I turn on the big-screen tonight. Today, some of the very best cyclists in the world are riding a road I pedaled back in June, over Blue Mesa and past the reservoir before the first sprint point in Gunnison. I’m planning my weekend, as the race will cruise near Allenspark, through Lyons and into Boulder on Saturday. The race concludes in Denver on Sunday. Thanks to NBC, the whole world will see some of the amazing terrain we get to see all the time. Wouldn’t it be nice if the world got to see our little piece of Paradise?
Local cycling enthusiasts would love to lure the race through Estes Park for 2013, I among them. I realize that our little town probably doesn’t have the money to host a start or a finish, but wouldn’t it be nice just to have some of the fittest athletes on earth come cruising through, bringing fans and fan dollars with them?

There’s more. My mother-in-law will occasionally sit down and watch broadcasts of the Tour de France, not because she’s any kind of cycling fan, but because the cameras often pan to show a wider view of the area the riders a racing through. During these broadcasts, she and my daughter will say, “we really need to go there.” With NBC beaming images of Colorado to 200 countries, I’m pretty sure some family, somewhere, will express the same thing. That could lead to more visitors.

I have friends who have visited some of those areas of France that I watch every July. With climbs here like Trail Ridge Road, an enthusiast from France or Switzerland is bound to heed the call and bring a family, as well as a bike, with them.

I don’t know the economic statistics of cycling tourists from other nations. I know that in the case of cyclists who participate in Ride the Rockies, they average a yearly income in the six-digit range. While the immediate impact of the race coming through might be good, lots of folks grabbing lunch or drinks or gifts while awaiting the peloton, the long-term impact would be better than any of the advertising our local promotional groups can afford.

It’s more than the lycra-covered butts or shaved legs. Fans enjoy the views of the high peaks, the waterfalls, the historic mining districts, our state’s history. All of this would be shared with millions of cycling fans all over the world. We have plenty of scenery and history for visitors to enjoy.

Now then, day one of the USA Cycling Challenge saw Garmin-Sharp rider Tyler Farrar score his first win in over a year. On a day that was much faster and much harder than anyone anticipated, Farrar and the main peloton caught Garmin-Sharp teammates Tom Danielson and Peter Stetina just outside of the finishing town of Telluride. A break-away group powered off the front less than six miles into the 125.6-mile stage. The break went out so hard that the world got the rare vision of American time trial specialist Dave Zabriskie, how shall I say this, ejecting his lunch. The punishing pace, which included the climb of Lizard Head Pass, put the race into Telluride about an hour sooner than the fastest assumed pace, 4 hours, 42 minutes.

Garmin-Sharp took four of the five awarded jerseys. Farrar took the first yellow leader’s jersey, as well as the green sprinters’ jersey. The King of the Mountains jersey went to former Durango resident Tom Danielson. The red-striped Most Aggressive Rider jersey was awarded to Stetina for his efforts in keeping Danielson out front. The one jersey that did not go to a Garmin-Sharp rider, the best young rider, went to Bontrager-Livestrong under-23 racer Gavin Mannion.

So far, this is not much of an indication as to who might hold any of these jerseys by Sunday. Farrar could hold the green jersey when all is said and done, but he is not likely to win the GC battle. Tom Danielson may get the polka-dots, but his aim is higher. Tommy “D” will want to yellow jersey by Denver. He’ll need a good, wide lead going into that time trial as the defending champion, Levi Leipheiner, is an accomplished rider against the clock.

Regardless, this should be a great race, one we should try to coax through Estes Park in the future. Just saying’.

I will throw in just a quick comment on Friday’s biggest cycling news. Lance was screwed from the moment USADA announce they would pursue the charges. USADA is beyond the law, if you check out their power. There are no appeals once they’ve ruled and they have only lost on arbitration once. I don’t know if Lance did it. I have not seen the evidence. The real problem is that no one outside of USADA has seen the evidence. No one can legally compel USADA to show what they have.

Whether Lance doped or not, his move to stop fighting is pretty much the best he could do for himself. To be honest, I would be surprised if he didn’t, but the way USADA is able to wield limitless power over our sport is ridiculous. They would have ruled themselves correct, whether Lance cheated or not. 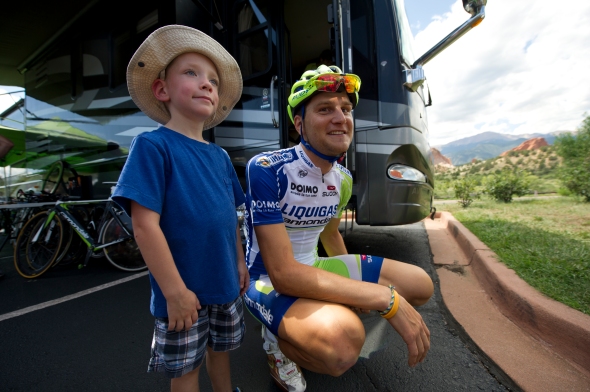 I hope they don’t test group rides for excess caffein.