I like to make my own riding goodies. I like making and mixing and grinding and bagging to make sure I know what is in my food and powering my ride. This is not always convenient, however. So I will sometimes root out good-tasting treats that won’t hurt my performance. I’ve found this and more.

Steve’s Original Paleo Goods (stevespaleogoods.com) sells packaged foods such as dried fruit, nuts and grass-fed beef jerky. The food is “clean”, no preservatives, no artificial colors or flavors. They also offer their “PaleoKrunch” cereal in several varieties, including nut-free. All are grain-free, gluten-free, dairy-free and, I can honestly say, very tasty.

Steve’s depends on fruit juices as sweeteners, various spices for flavor and just nature for the basic ingredients. The stuff is fabulous. There is more to this, however, than just the good feeling in my mouth, stomach and legs. I also get a warm feeling in my heart.

Fifteen percent of profits from Steve’s Paleo Goods go to supporting Steve’s Club, a non-profit organization that brings fitness, nutrition guidance and mentoring to at-risk kids. Steve Liberati started a CrossFit gym in 2007 in a public housing complex in Camden, N.J., geared specifically to help these kids. He wants to give them alternatives to the drugs and gangs that are rampant in what the FBI calls one of the most dangerous cities in America.

In October of 2008, Liberati and his wife began putting together bags of dried fruit, raw nuts and the like, to help kids eat better during their school day. Liberati realized he could sell the concoctions and use the money to buy equipment for his CF gym. The “PaleoKits” were a hit. It also gave Steve and his little CrossFitters more things to do. Liberati hired some of the kids to help him bag and box the PaleoKits and keep track of orders and inventory.

The Steve’s Club National Program began in fall of 2009 when CrossFit affiliates from around the US saw what Liberati was doing and wanted to help their own communities. In May, 2011, over 30 CrossFit Affiliates across the US participated in the Steve’s Club Beat the Streets Fundraiser, a workout that raises funds to open local Steve’s Clubs in cities with a need.

Now there are more than five local Steve’s Clubs help kids get fit and make better life and nutrition decisions. For more on Steve’s Clubs or Steve’s Paleo Goods, visit stevespaleogoods.com or stevesclub.org.

The Tour de France has begun, and at this early point, it’s hard to tell who is in contention. Most of the first week is pretty flat. The first sorting came during the team time trial on Tuesday, when Australia’s Orica GreenEdge surprised the field by taking the stage by mere hundredths of seconds over defending world team time trial champions, Omega Pharma Quickstep. Neither team has a real overall threat. Team Sky finished third, three seconds off of the winning time, keeping their rider Chris Froome in the mix. Alberto Contador’s Saxo/Tinkof team was fourth, Garmin-Sharp was sixth and Tejay Van Garderen’s BMC squad was 26 seconds off the pace, slotting in at ninth.

The TTT, like descending fast, won’t necessarily get you the win in a three-week-long grand tour, but it can surely hand you a loss. The smaller European squads, like Argos-Shimano and Eurocar, were more than a minute down in the finish. Though, these teams don’t really have a GC threat. One could almost argue that French fan favorite, Tommy Voeckler, could be a threat, but he doesn’t really have the team to get him through to Paris with a lead. Certainly not after placing 19 out of the Tour’s 22 teams. Voeckler will have plenty of fans by the road beginning this weekend when the peloton hits the slopes of the Pyrenees, but teams are aware of the little Frenchman and his climbing talent. Strong teams will be able to send domestiques after “Little Tommy” if they feel his lead is getting out of hand. It will still be fun to watch. Voeckler likes to suffer and loves to make others suffer to catch him.

The first week of the Tour also tends to be crash week. The flat stages invite high speeds and nervous riders. Invariably, there are crashes. The crash on Stage 1 took out most of the big sprinters in one fell swoop. It also demonstrated just how tough these guys are. Some rode stages two and three with bandages on elbows and knees. Omega Pharma-Quickstep rider Tony Martin finished the first stage, then was packed into an awaiting ambulance. He was diagnosed with a bruised lung. Team Sky’s Geraint Thomas is riding with a hairline fracture in his pelvis. Cannondale’s Ted King is riding with a small brake in his shoulder. These are not guys taking dives on manicured grass, or taking a charge even on wood floors. These are guys hitting the pavement at 25-30 mph, losing skin, breaking bones, and continuing to race. These are hard, hard people. 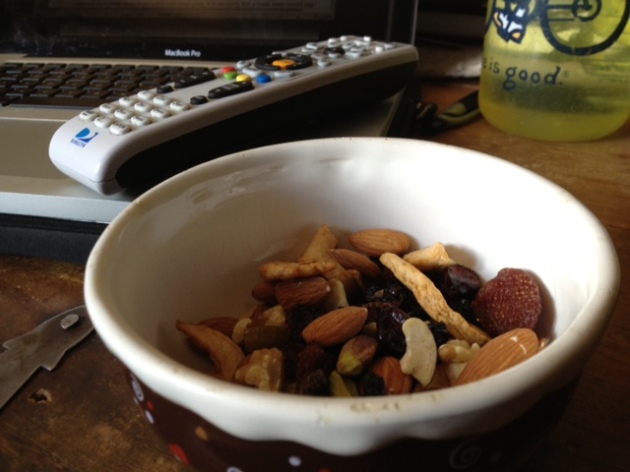 This entry was posted on July 14, 2013 by Walt Out West. It was filed under Cycling photography/photography while cycling .