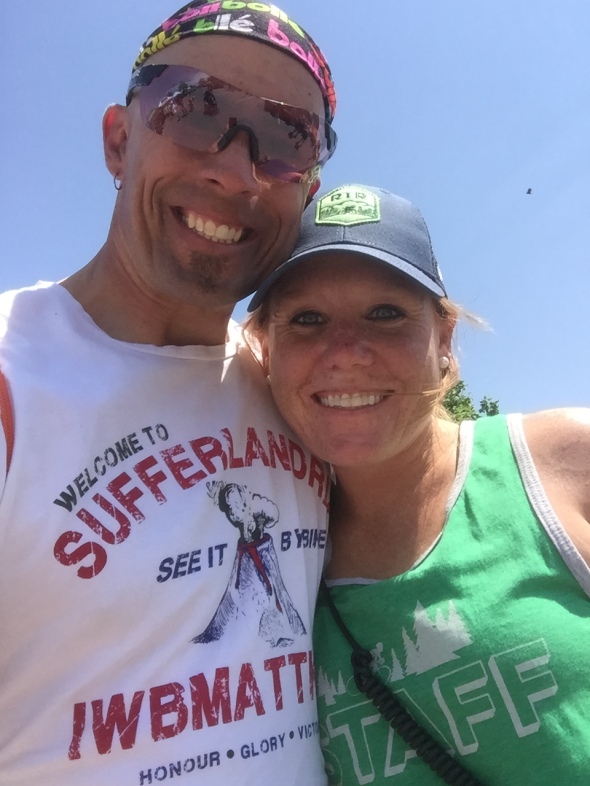 Me with the new RTR Tour Director, and all-round great lady, Renee Wheelock.

Grand Tours have begun, one-week tours and the Spring Classics have come and gone. For mere mortals, like me, the cycling season has just begun. Without a doubt, the biggest of the multi-day rides in Colorado is Ride the Rockies. I had the pleasure of speaking with the tour’s new director last week.

Renee Wheelock was the Ride the Rockies tour intern when I first met her in Gunnison, the start of the 2012 RTR. In the intervening years, Renee has climbed to the position of Tour Director.

“It’s pretty exciting,” she said about her promotion. “It’s a unique perspective that allows me to provide some leadership.”

Wheelock started in March of 2012 with RTR as an intern, helping out where ever she was needed. It was just a single season before she moved into the role of Community Relations Manager, and three more before landing on the big saddle. But change is nothing new for Wheelock.

“I’m from all over,” she says.”I was born in California, lived in Tucson, moved to Australia for a while and went to college in North Carolina.”

After earning a degree in Elementary Education, Wheelock took a bike trip across the country when she first discovered Colorado. After finding energy bars in the convenient stores, she decided Coloradans enjoyed the lifestyle she wanted. But spearheading Colorado’s premier tour is not all sunscreen and wind through your helmet.

“We are already gathering ideas (for the 2018 RTR). Usually, we start up again between August and October, talking with the communities, taking trips to meet with them. In December we start working out the details of the route, organize the Route Announcement Party (which happens in early February). As a team, we all have different projects, but it’s all a small team.”

She adds, “I think it surprises people when I tell them there are only three people working full-time. This is a full-time job and it takes all year to put an event like this together.”

Wheelock pointed out that her degree has been helpful in running RTR.

“When you look at teaching, it’s planning and adjusting on the fly. Teachers also tend to be pretty detail oriented,” she says. “When I was teaching abroad, I also discovered my passion for the outdoors and fitness.”

Adjusting on the fly has been a hallmark of Wheelock’s time with RTR. In 2012, the route was detoured on the last day to avoid smoke from wildfires around Horsetooth Reservoir, west of Fort Collins. In 2013, the route detoured again, creating the longest RTR route in its history. This time, the Royal Gorge park was in flames. Then, in 2014, the first day saw snow on Berthoud Pass, a closure by the State Patrol, and a huge sag with help from the Winter Park ski busses.

“We always have contingency plans,” Wheelock points out. “The beauty of the event, with such long-term partners, makes it special and rewarding when we see all hands on deck to make it work.”

Wheelock plans no major changes with RTR this season, though, one new thing will be a mobile app, which should promote even more of a community spirit within the tour. Wheelock acknowledges that at 32 years in, it’s getting hard to create new routes. In fact, riders have seen much of this year’s route before, but not all at once.

The 2017 route visits many of the towns and cities that Wheelock saw in her first year. Alamos, Pagosa Springs, Durango, Gunnison and Salida were all on the route in 2012 and 2017, though not in the same order or direction. Riders will travel over the east ascent of Wolf Creek Pass, this time. Riders can enjoy a short ride through the Southern Ute Reservation on the third day, then head north from Durango on Day Four over the picturesque Million Dollar Highway through Silverton and Ouray toward Ridgeway. The next day, riders head a short way into Montrose, with an optional “Challenge Loop.”

“Each day gets better and better,” says Wheelock. “Some riders might take the day in Durango off, but (the route through the Ute reservation) is beautiful.”

Wheelock continues, “The day into Montrose is quick and downhill, and the challenge loop, there’s not much traffic. The towns have all really come together.”

The last day between Gunnison and Salida includes the ascent of Monarch Pass.

“You never know how you will feel from one day to the next,” says the director. “Monarch is a slow, steady climb. Climbers might feel dog-tired, or they might feel really strong after six days of riding.”

One way or another, riders will likely enjoy the first Ride the Rockies under Wheelock. Her passion and that of her staff and army of volunteers, should create yet another beautiful tour, and years-worth of memories and stories. Hopefully, we will have Renee to thank for years to come.

Yes, the name of the post was on purpose. Remind those who follow me, and remind myself, that I’m still writing. It’s also being grateful that I’ve lived to this point.

Spent the evening sobbing on the couch with my daughter and my wife. We watched the movie version of our daughter’s current favorite book, “The Fault in Our Stars.” It’s all about teenagers dying of cancer, how they deal with it and how the people they love deal. I’ve only dealt with glancing blows, as far as cancer is concerned. I suppose I am very lucky in that respect. I still get to make new adventures, write new chapters.

It’s been more than 20 years since a casual friend and coworker died of cancer. He was exceptionally cheery in the short time that we worked together. The cancer originated in his lungs, but traveled pretty quickly. We all found out something was up when he didn’t come to work because he woke up partially blind and paralyzed. The tumor was in his brain. When he came back to work, he wore a Denver Broncos hat to cover the dent in his head from the operation. We asked why the doctors didn’t replace the bit of skull, to which Brian replied it had been infected. He told us he was waiting for a titanium replacement. Already a bike geek at that time, I explained to him that titanium parts counted as cool. I was still amazed, however, how he managed to be so cheery. He had a distinct walk after the brain operation and a divot. He explained that, at that point, he was just happy to wake up and hear birds in the morning. Wow. He died the fall of 1993.

My main job these days, is working with another sort of terminal disease. I work in an addiction rehab. A friend asked me recently, “Do you have a background in counseling?” No, I replied, I have an extensive background in addiction. I laughed, hoping he would not feel awkward about the exchange. I can laugh at that disease, now. The Big Book of AA says, “Why shouldn’t we laugh? We have recovered and been given the power to help others.” That is what I try to press upon guys. We survived and now have a chance to truly live.

For me, that’s where the bike comes in. I received my first bicycle when I was eight or nine. It was purple with the big banana seat. I jumped off of curbs. I jumped off of ramps. I jumped off of dirt mounds. I stood and climbed up the steeps and raced down the other side. It was my escape. My folks were divorcing and I was mad as hell. The bike gave me relief.

After spending several years chasing other, less productive escapes, I found the bike again. I had very little money, couldn’t afford a car or insurance. I bought a Schwinn High Sierra mountain bike for $800. At the time, it was middle of the road. Steel, rigid and gun-metal gray. Indexed bar shifters on flat bars. Nothing fancy, but the rebirth of freedom, for me. I rode it to work and eventually back to school.

Years later, American Express moved me to Denver from Omaha. I spent most of 18 months staring out my office window at the mountains, counting down the minutes until I could hop on that old Schwinn and hit the trails. It did not take AmEx long to realize that I was fantasizing a lot more than working. They gave me a big check and escorted me out of the building. I used the check to buy a couple more bikes and race a couple seasons. Oh, and I returned to pursuing a BA in Journalism, as well.

I bought a ‘cross bike in 1999. I didn’t plan to race it so much as commute. I lived about 10 miles from downtown Denver where I worked and went to school. I had spent some time driving to downtown Denver but parking was expensive and I became an angry, angry being when stuck in traffic. The bike gave me freedom from that anger. I liked myself a lot more without the vein popping out of my forehead.

I now live in Estes Park where I still have the ‘cross bike, but have long since sold the mountain bikes. I have a regular road bike and a tri/TT bike, as well. New passions. New freedoms.

All of this is possible because I survived. A lot of people, not the least of which were my parents, helped me along the way. I get to feel the cold air on my face. I get to spend 10 minutes rubbing the zinc oxide over my face, head, neck and arms. I get to spend money on bike repairs, occasional body repairs, odd food and clothing. I say I get to because many don’t. They never have the chance.

I don’t write this to guilt anyone into doing anything. I write to remind myself, and anyone who wishes to read this, that this precious life is pretty short and less predictable. No one knows how many days he or she will be allotted. We don’t know what’s next. I don’t know how I managed to get to this age, with his beautiful family in this beautiful town. I feel I’m living a life beyond regulation time. I want to make the most of it.

This is the most important part I like to pass on to the seemingly ship-wrecked souls I meet at the rehab – We have found solid ground. We have a second chance. What do you want to do with it?

I don’t really believe in either heaven nor hell. I have seen hell in many forms and don’t believe in a loving God who would send the tortured to such a place, only to be tortured more. You could try to send me examples of those you feel need to be tortured forever, but I won’t be convinced that there is a place for that.

I believe that when we are done, we are done. Nothing more. I believe that both heaven and hell are places right here. It is up to us to both see this and to make it. My bit of heaven, my salvation, began when I rediscovered the bike. Now I try to use this simple, efficient, elegant machine to bring a bit of paradise to the fellow sufferers who come to this salvation after me.

I hope all who read this are finding their Paradise, their salvation. In this time of Thanksgiving, I hope your hearts, as well as bellies and bike stands, are full. 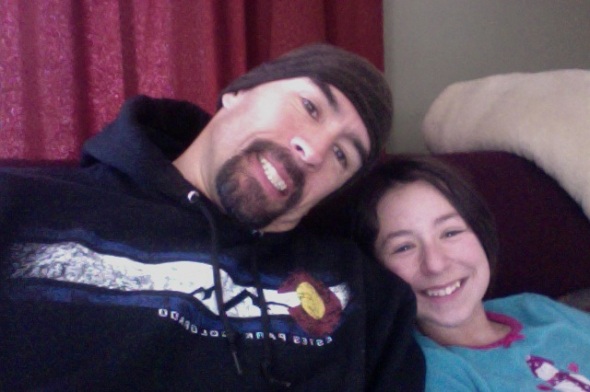 Zoe and I lounge on the couch.