Here we go, one last time

So the USA Pro Challenge is set to start today with the circuit between Aspen and Snowmass. The stage was so popular last year that the organizers brought it back this year. While that returned this season, at least one fixture of the peloton won’t be back next year.

Lunchbox-hero Jens Voigt will ride one last race, the Pro Challenge, then hang up his bike as a pro. The Jensie grew up in the old East Germany and has been a pro since 1997 and has worn the coveted yellow jersey of the Tour on two occasions. Two years ago, Jens won an epic breakaway stage from Aspen, over Independence Pass and all the way into Beaver Creek.

Jens has made his career sacrificing for his team leaders. This, and his easy-going personality, has made him a world-wide fan favorite. No one attacks more. No one suffers better. No one stands around and chats with fans quite as much as Jensie.

Good luck this week and enjoy your time with the family in retirement. And thanks for the memories. 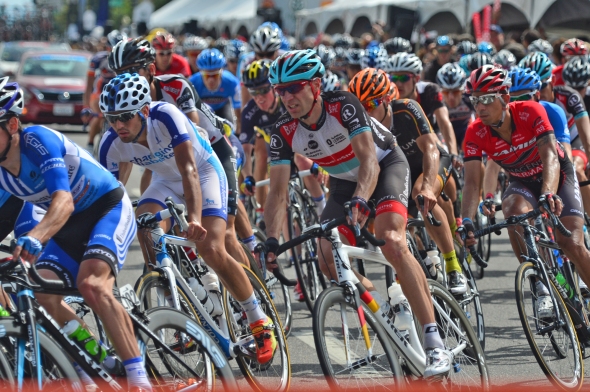 RadeoShack rider and fan favorite Jens Voigt leans through the turn off of Broadway onto Colfax Avenue in Denver on Sunday. Voigt was quoted as loving Colorado race fans as much as they love him as the fans are also riders and know what it’s like to suffer through the mountain climbs.

This entry was posted on August 18, 2014 by Walt Out West. It was filed under Cycling photography/photography while cycling and was tagged with bicycling in Colorado, Boulder, cycling, Jens Voigt, USA Pro Cycling Challenge.