This weekend’s broadcast of the USA Pro Cycling Challenge beamed images of some of the world’s best cyclists all over the world, and with it, the vistas of Estes Park.

“America’s Race” started in Aspen on Monday, August 19, and wound its way through the Rocky Mountains, including through Northern Colorado and Estes Park, on its way to the finale in Denver. Race organizers boasted 200 nations and territories saw the race in its 600-plus mile journey through the state.

By the time the race reached Estes Park on Saturday, August 24, 114 out of the original 128 riders remained. Altitude seemed to be the biggest challenge to riders used to high points of 7,000 feet. Joe Dombrowski was looking forward to competing in the US with the support of Tour de France winner Chris Froome. Froome only arrived three days ahead of the start and suffered throughout the week of racing. Dombrowski developed a nose bleed, a condition he had suffered as a child. The bleed hadn’t stopped after two stages, forcing the young American to drop out.

Slovak sprinter and Tour de France Points champion Peter Sagan arrived two weeks ahead of the race in an attempt to acclimates. It seemed to pay off. Sagan nabbed the first stage win after a three circuit ride of almost 64 miles from Aspen to Snowmass and back.

The second stage began in aspen and quickly took the riders to dizzying heights, climbing first over Independence Pass, the Hoosier Pass and finally the short but steep Boreas Pass before plunging into Breckenridge. The 126.1-mile stage was battled out between BMC’s Mathias Frank, Garmin-Sharp’s young Australian Lachlan Morton and, surprisingly, big Peter Sagan. 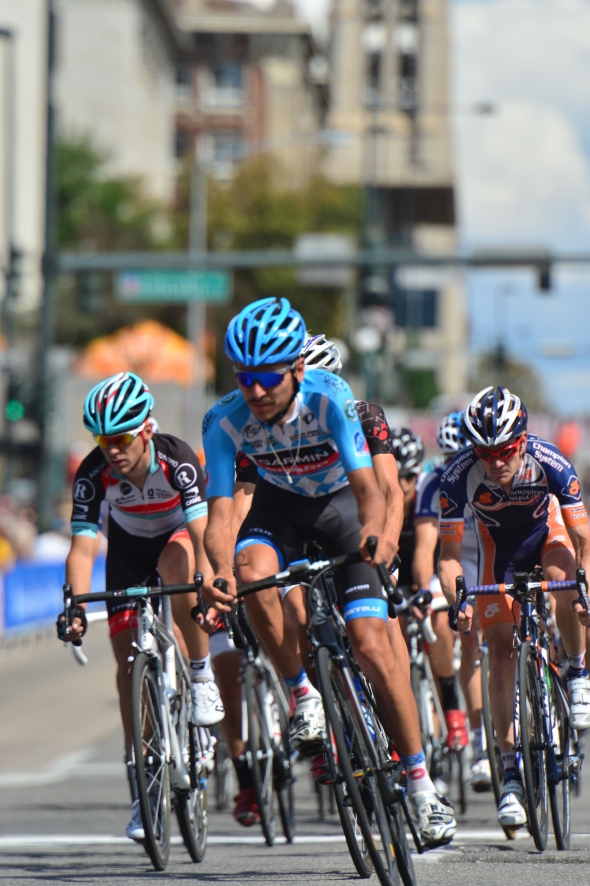 Lachlan Morton was a revelation in the Pro Cycling Challenge. The Best Young Rider has ridden the roads of the Challenge since he was 13.

Frank and Morton sparred for most of the day in the front breakaway before Frank was able to attack and make a gap on the last few yards of the Boreas Pass climb. Morton stayed close behind but could not catch the Swiss climber. Morton was able to hold of Sagan who showed impressive strength in ascending the last climb in enough time to nearly catch Morton on the run into Breckenridge.

“The altitude is the biggest difference,” said the stage winner, Frank. “In the Alps you finish at the altitude we’re already at (to start) here.”

Sagan would lose the Smashburger leaders’ jersey by 11 seconds, but it was Morton, not the stage winner Frank, who would wear the golden fleece to Steamboat Springs on Stage 3.

The third stage headed north out of Breckenridge on a 106-mile route that saw the race’s elder statesman, German RadioShack rider and fan favorite Jens Voigt, spend most of the day driving the break. Voigt and four other rider, none of whom threatened the overall standings, raced away from the pack over the day’s first climb, Swan Mountain, and stayed away, working together nearly to the foot of the day’s big climb.

Just shy of the Rabbit Ears Pass climb, the 41-year-old Voigt pulled away from the rest of the breakaway, much like he had done to take a stage win in last years Pro Challenge. Voigt lead the race over the KOM point on the pass and down the west side. Team Cannondale was not going to make it easy, however.

Peter Sagan’s squad, with help from Argos-Shimano and Optum-Kelley Benefits, swallowed up the flagging breakaway, leaving the veteran, Voigt, alone in the lead. With a long, flat final six miles, the peloton reached speeds of 40 mph, catching the German nearly within sight of the finish.

“I was disappointed,” said Voigt. “But I’d rather get caught then get in a crash.”

RadioShack rider and fan favorite Jens Voigt leans through the turn off of Broadway onto Colfax Avenue in Denver on Sunday. Voigt was quoted as loving Colorado race fans as much as they love him as the fans are also riders and know what it’s like to suffer through the mountain climbs.

Shortly after the catch, with about two miles to go, wheels touched and several riders went down. Some went to the hospital, the most rolled across the line. Those who were caught behind the crash were awarded the same time as the winner, as the crash occurred so close to the finish.

At the finish, it was again the Terminator, Peter Sagan, who collected the win, beating Luka Mezgec of Argos-Shimano.

Stage four was marked by the organization as the Queen Stage. The route took riders 103 miles, but included the long steep climb of Bachelor Gulch.

“That thing (Bachelor Gulch) is incredible,” exclaimed King of the Mountains contender Matt Cooke of the Jamis-Sutter Homes team. “I’m just impressed that anyone can ride up that pretty fast. It was steep and one heck of a course.” 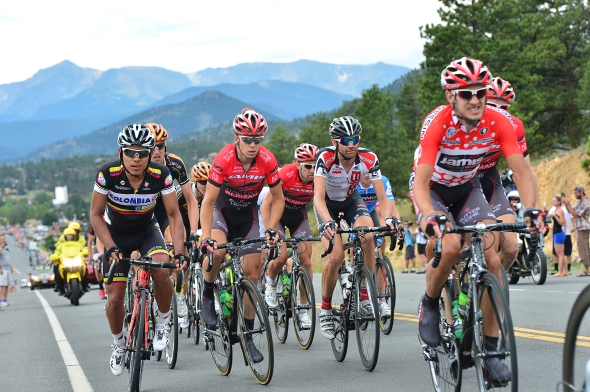 Matt Cook, right, wears the red Nissan King of the Mountains jersey as riders speed away from Estes Park on Saturday. If the stage seemed fast to roadside observers, it was: riders averaged over 27 mph over the 115-mile stage.

The climb blew the peloton apart. Groups of two and three remained after Colombian rider Janier Acevedo of Jamis followed Garmin-Sharp’s Tom Danielson, Tejay van Garderen and Matias Frank of BMC as they chased down a solo break by Mick Rodgers of Saxo-Tinkoff. Rogers had been the lone survivor of the early break, but was caught and dropped by the elite riders.

In the end, Acevedo and Colorado native van Garteren worked together to drop Danielson and cross the line in Beaver Creek. Acevedo got the stage, but van Garteren got the yellow jersey.

Van Garteren tightened his grip on the leaders’ jersey in the next day’s individual time trial on Vail Pass. The ten-mile route saw van Garteren take out the win in yellow, just four seconds ahead of Garmin-Sharp’s Andrew Talansky.

Tejay van Garderen cruises through the streets of Denver with the jersey we held since Beaver Creak Three days earlier.

The sixth stage from Loveland to Fort Collins would be the only real chance for anyone to catch the young Fort Collins native, van Garteren. While a large, 15-man break got away early and carried a 2-minute lead over the climb of Devils Gulch and into Estes Park, Sagan’s Cannondale squad came to the fore and crushed all hope of a breakaway win. After a few scares on the climbs around Horsetooth Reservoir, Sagan roared across the finish line on Mountain Avenue in Old Town, his third sprint victory and the last he needed to secure the Points Category win.

The Peloton buzzes around a switchback above Glen Haven on Saturday. The ability to get close to the riders drew around 700 fans to the last KOM climb outside of Estes Park.

In Denver, riders got a break from climbing, ascending and descending only 30 feet for each of the eight circuits from the Capitol Building on Broadway and Colfax, east to City Park, back to Speer Blvd, then back to the Civic Center Park.

A breakaway formed early and was again chased down by Team Cannondale, giving Sagan his fourth win in seven stages. Van Garteren finished safely in the pack to claim the overall victory. The win was van Garteren’s second major stage race GC victory this season, after May’s Tour of California.

Mathias Frank, Tejay van Garderen and Tom Danielson celebrate their final placings by soaking each other, the crowd and the podium girls after their presentation.

Christian Vande Velde, the 2012 Pro Challenge champion, waves a fond farewell to the Colorado crowd on the podium on Sunday. Vande Velde, who has been a pro racer since 1998, finished as high as fourth place in the Tour de France.

All images copyright Walt Hester Photography. Visit WaltHester.com to see all images from stages 6 & 7 of the 2013 USA Pro Cycling Challenge

For more on the race, go to usaprocyclingchallenge.com